I’ve been working in the shop window in the Waterdale Centre for a few days now and today I was joined by three other artists who accepted my challenge.

Nathan Turnbull and Katherine Milns, who have studios alongside mine above the Brevon Art Gallery, and regular exhibitor Janet Samson also came along.  Our challenge was to work together on a single painting (two 3ft square canvases joined together) using the view from the window as inspiration.  With four very different styles the outcome was never certain but it all came out well and we are still friends. 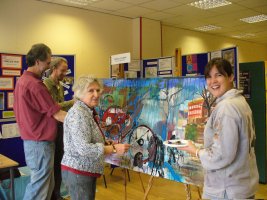 The event attracted many members of the passing public to come in for a chat and see what we were up to.  Some artist colleagues also came by to cast a critical eye over things and the general verdict was that the experiment was a success – so much so that we’re going to do it again next week (Tuesday 10th November).