Imagine yourself sitting on a white rocking chair on the deck of a hundred year old wooden house while watching dolphins and pelicans feeding just off shore. Warm, even in November.  Good food, good company and 2 weeks to just follow your interests.  Almost too good to be true but that’s exactly what I found when I travelled to Bald Head Island near Doncaster’s twin town of Wilmington, North Carolina, USA. 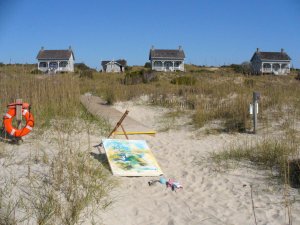 I had been invited to the No Boundaries International Artists’ Colony along with 11 other painters from Denmark, Germany, Spain, Italy, Ghana, France, Brazil, Macedonia, Holland and seven American artists.  We stayed in Captain Charlie’s Cottages, three of the oldest buildings on the island built alongside the beach for the lighthouse keeper and his colleagues, close to The Point, where the Cape Fear River meets the Atlantic Ocean. 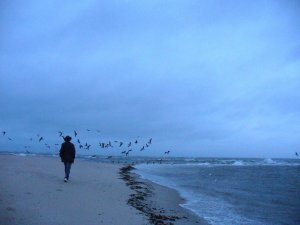 The No Boundaries colony is arranged every 2 years by Pam Toll, Gayle Tustin and Dick Roberts, three well established artists and all round splendid people from Wilmington, to give invited artists the opportunity for two weeks uninterrupted painting on idyllic Bald Head Island. 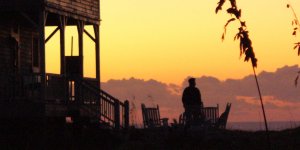 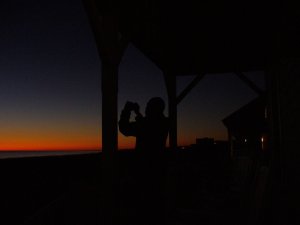 The surroundings were fantastic if, like me, you appreciate a bit of space.  Every morning I was up to see the sun rise over the sea and every evening watched it set – also over the sea.  At night it was dark enough to see the Milky Way and, apart from the waves, totally silent.  The wide views of sea, sand and the distinctive wooden houses all bathed in the clear pearly light of the Atlantic coast could not be ignored.  For the first week I put aside my usual ‘studio’ style and set about some large open-air acrylic paintings of the beach, sand-dunes and nearby marshes. 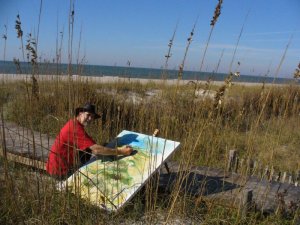 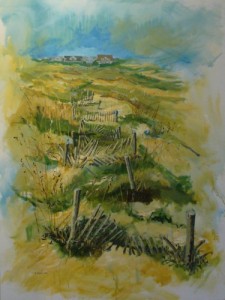 This was rather like the open-air watercolour landscapes I was doing 10 years ago but on a grander scale.  With temperatures in the mid 70sF (25C) a breeze was welcome but on some days the canvas had to be tied to the easel and the easel tied to the boardwalk to be able to work.  I also made a few paintings in my ‘studio’ style using much stenciling and scraping to capture some of the history of the place but the open deck wasn’t the easiest place to keep track of paper stencil pieces.   It was interesting to watch how the other artists developed their paintings and there were several techniques used that could answer questions raised in my own work.  I’ll be exploring their potential over coming months. 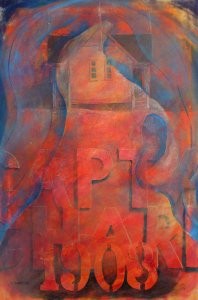 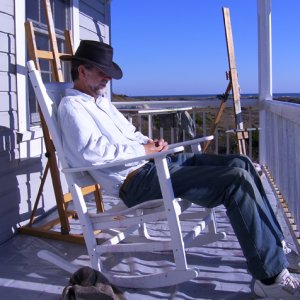 As well as the artists on the island, I had the bonus of meeting various groups of people in Wilmington including members of their Sister Cities Association.  They invited me to a very pleasant lunch and then took me along to meet some 2nd graders at one of their schools.  I had a package from their pen-friends in Doncaster for them and they had many questions to ask me.  On another day I gave a presentation about my paintings to students at the University of North Carolina and later did a workshop for teenagers at the Dreams community group.  I met with the Mayor of Wilmington who gave me a pen set to bring home in exchange for the one I had brought from the civic mayor of Doncaster.  Without exception they were lovely, welcoming people and I’ll remember them fondly.

The fellowship and good nature of all the artists easily overcame any language barriers as ideas and techniques were shared through the days and stories, songs, music and dance went late into the evenings.  Many visitors came to the cottages to watch the artists at work and returned to see the finished works in the closing exhibition back on the mainland at the Acme Studios and Gallery in Wilmington.  The quality of the paintings was very high and many pictures were sold including some of my landscape and studio work.  My remaining pictures are on display in the island’s gallery. 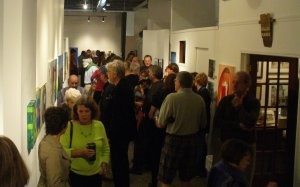 It’s been just about a year since I wrote here last and a very changeable one at that.

At this time last year my art work was on a high and going very well.  On a personal level however, my mother was recovering from a bad fall and  my father was not very well.  My mother recovered quite quickly but by March my father was diagnosed as having cancer and sadly died in May.  Less than a month later I too was diagnosed as having a large cancer in my colon.  Fortunately, due to the prompt and ecxellent work of the surgeons at Doncaster Royal Infirmary, I had a successful operation and made a good recovery over the next 3 months.  Since then things have taken off rapidly again.  My website has been completely redesigned and rebuilt by the original makers along with some promotional flyers.  Commissions have appeared from nowhere (or rather through people viewing my website) and I have more than enough residency work to last the next year.  Add to that the fact that I’ve just got back from a very invigorating and successful international artists’ colony in North Carolina and it has been quite a year of changes.